About Our Owner, Laurie Mason


Laurie Mason, a former crime journalist who worked at the Morning Call for six years before retiring from the industry in June. Laurie channeled her newfound interest in cat rescue into a side beat there, frequently writing about the Lehigh Valley’s animal welfare organizations. A story she wrote in 2019 about volunteers who wrangle feral cats around Allentown as part of a trap, neuter, return program to reduce the homeless cat population won a national first-place award from the Cat Writers’ Association. 'Kitten season' opens for Lehigh Valley’s feral-cat catchers - The Morning Call (mcall.com) 2019 Communications Contest - Cat Writers' Association, Inc.

"I often joke that when I write my autobiography, I'm going to title it - From Murder to Meow -" Being a reporter is very stressful. There were some nights, especially after a covering a homicide trial with child victims, that the only thing that would allow me to decompress enough to sleep was holding a purring cat in my lap. I've talked to a lot of people who find having cats around to be therapeutic."

Cats are also highly entertaining, as anyone who's browsed the thousands of cat videos uploaded to Instagram & TikTok each month can attest.

The "Haus" in Purr Haus is a nod to the Lehigh Valley's rich German American history. Mason said she's not trying to compete with big box pet supply stores. Instead, Laurie is aiming to delight shoppers with a surprising mix of items for both pets & people.

"You'll be able to pick up Dezi & Roo cat toys, which are designed by veterinarians, a t-shirt from Kittees; a woman-owned California company that donates a percentage of their profits to no-kill shelters, or a backpack cat carrier from Travel Cat that makes your kitten look like a little astronaut when he’s going to the vet. On another shelf, you’ll find wine glasses etched with clever cat artwork next to tonics from the Two Crazy Cat Ladies, a Las Vegas firm that makes holistic flea-prevention solutions & other remedies. Plus, cat beds, scratchers, cat print scarves, gloves for humans, & lots of other unique gifts,” Mason said.

While searching for a location & inventory for Purr Haus over the summer, Mason kept busy by fostering homeless kittens. She said she intends to continue this work at the boutique by inviting cat rescue groups to visit with a few adoptable kittens on specific days, & by setting aside a part of the shop as a "rescue resource" area, where nonprofits can post photos of available cats & kittens, leave educational brochures & drum up membership. She would also like to team up with other local businesses; such as, breweries for cat rescue fundraisers. And she'll donate a portion of every Purr Haus logo t-shirt & baseball hat to a featured cat rescue organization. 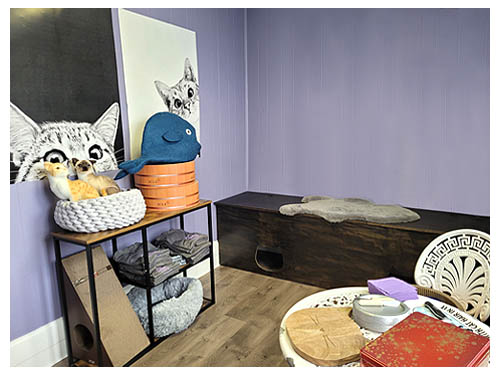 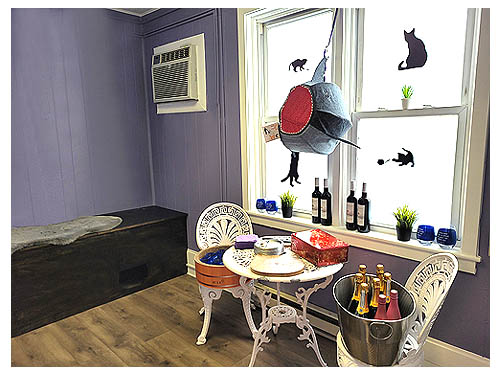 Giving back is important to cat people, Mason observed. "Cat people are a passionate breed, they don't just care about their own pets, but are concerned with the plight of all cats."

"I imagine Purr Haus will eventually becoming a hub for the Lehigh Valley's cat community," Mason added. "A place where you can pick up a great new toy for your cat, or a fun cat-themed gift for a friend, all while learning how to help local cats in need." 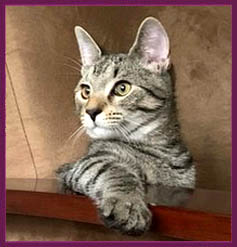 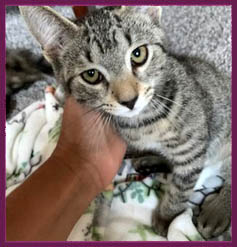 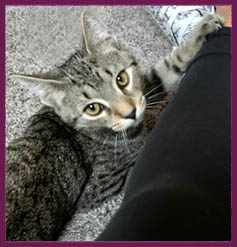